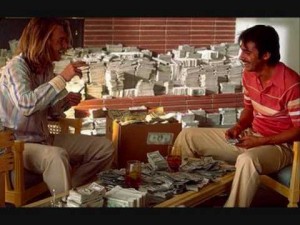 “Justin, I have this great idea for an app, we are going to make billions of dollars. I have to make sure it has not already been done. It is seriously an amazing idea, so I can’t tell anyone. I know you are a great programmer and I know you can make my idea come to life. If I tell you the idea, and you work your magic from there on, we can split 80% me, 20% you. Deal?”

Say this to my face and will respond with a smug smirk and disregard everything you say after that. Let me comment on this quote:

“Justin, I have this great idea for an app, we are going to make billions of dollars (Very unlikely, you shouldn’t think like that). I have to make sure it has not already been done. It is seriously an amazing idea, so I can’t tell anyone. I know you are a great programmer and I know you can make my idea come to life. If I tell you the idea, and you work your magic from there on, we can split 80% me, 20% you (Insulting and delusional). Deal?”(No)

These types of thoughts are typical for a novice/aspiring entrepreneur. Unfortunately for them, their thoughts are completely wrong in the majority of cases. If you are an aspiring entrepreneur, I suggest you follow this Stanford Podcast. The first podcast is titled, “How to Unlearn Your MBA”, and is a great talk to get beginners into the right ballpark. Spoiler alert, David recommends that no one should aim to make the next Facebook and Google. The chances of having that kind of success is over one in a billion. He instead suggests to design a company with recurring customers through subscription and such that can eventually earn maybe 10 million a year. 10 million dollars a year would make most people happy, and I think he is absolutely right. I actually think it would be better to be a multimillionaire than a billionaire as you would get less attention from the media. Another thing I would like to mention in the app world is that just because you have a good idea for an app, it does not mean you have a good idea for a potentially high earning app. Today’s most profitable apps unfortunately take advantage of people with addictive personalities. These addicts pay lots of money on virtual currency. Meanwhile, a great app idea may only be useful to a select group of people. On top of that, you have to reach out to that target audience to earn your money.

There was another time I met this friend of a friend and he came over my apartment/office. The next day he got my phone number on Facebook and tried to hangout with me as much as possible. One time he slept over all weekend without ever me inviting him. Anyway, him and a group of my real friends were talking, and I brought up an idea for an app.  The app was to make meme t shirt and sell it. This kid says he is an entrepreneur but his resume doesn’t show that. Anyhow, he wrote up a bunch of Power Point slides to show to me and my developer friend. The only thing was he had no idea what he was talking about. He wanted to print and hold and inventory of t shirts to start out and I was able to convince him that he was wrong. Anyway, he wanted to have an all night hacking event where me and my other developer friend put this app together. We were all at my apartment,  but my developer friend and I rightly blew him off. It is an unfortunate reality that if you are successful, you need to watch your back. You can’t be nice to everyone you come across. There’s people out there that want to use you as a stepping stone, and/or be in your scene which in their eyes is better than their current life.

The second no no, that if the idea has already been done, you cannot go through with the idea. I like to argue that in the world of software, the word ‘original’ holds no meaning. Before Snapchat, an app that created the current youngest hypothetical billionaire. Evan Spiegel, the CEO of Snapchat is a hypothetical billionaire, or to be more succinct not a billionaire because he cannot liquidate his assets into a billion dollars of cash. Mark Zuckerberg can do this and is thus a legitimate billionaire. Some of his emails just got leaked, and Evan Spiegel was commended by some people for his technical talk. He basically said Snapchat needs to start making money, it has not made any significant money yet. They are currently experimenting with advertising implementations. The venture capitalists own the hundred of millions of dollars they put into the company. But before Snapchat there were ephemeral communication technologies as the do not log feature on Google chat, and it even came built in with the original AOL instant messenger; the chats were not saved. To stick a fork in this incorrect way of thinking, some examples of companies that have thrived, despite having their idea already implemented by another company are Google, Facebook, and need I say more?

On to the next fallacy, the belief that you should not tell anyone about your idea, because someone would steal it. I personally have never had this belief, but with the story of Facebook in the movie, “The Social Network”, Mark Zuckerberg stole their idea and ruined the Winklevoss twins. Let me just point out that those guys are hilarious to me, they seem like real life fictional characters. The Winklevoss twins got Mark Zuckerberg to work on their project for no pay, and they didn’t make him sign any contract. First off, that is very disrespectful to expect someone who was offered 7 figures to work for Microsoft out of high school to finish their project without pay. On top of that, the fact that they didn’t make him sign any sort of contract puts their business intelligence in the mentally retarded range. MBA degrees from Oxford and Harvard educations can not prove that someone is intelligent anymore. Anyhow, they were able to bust Zuckerberg by hiring an investigator to dig up AOL Instant Messenger conversations with Zuckerberg basically saying, “I’m going to screw them over”. Bing it if you want to know what he really said. Going back to the fallacy, you actually want to tell anyone and everyone about your idea. The reason being is that you need to get input to see if people would be interested in your product. That basically sums it up.

The final fallacy novice entrepreneurs have inside them is that delusion that the idea is what is valuable. The Winklevoss twins cried Mark Zuckerberg stole their idea. An idea is worth exactly 0 dollars if it is not implemented. That is where the developer comes in. On top of that, it isn’t just the development of the product, the application of the software needs to trump competitors. You don’t have to be a technical guru like Bill Gates are Mark Zuckerberg to succeed, you just have to know how to run the show. Some people believe that they can just spit out an idea, and expect me to take everything else from there. That is insulting.

So if we ever cross paths and mobile phone apps come into the discussion, you should now know how to approach me. You are welcome.